If there is anything we already know in the smartphone industry, is that Google Pixel smartphones will always leak. The search giant does not seem to be concerned with its devices appearing to photos several months ahead of their release. The leaks became a tradition since the days of the Google Pixel 3 XL with the tall notch display. Since then, it’s common to expect a Pixel smartphone to appear for photos at least once. The Google Pixel 7 series won’t be an exception and the first leaks are already popping out. The Pixel 7 will only appear in October at latest, but a new prototype emerged.

To recall, before the the Pixel 6 series unveiling, we saw a Google Pixel 6 prototype listed on eBay for sale. The leak showcased the phone’s design and build ahead of the launch. Now, it’s Pixel 7 turn to appear in the e-commerce platform. Ahead of the phone’s launch, that is only happening by October, the phone had its design exposed. The device seems to be a vanilla Google Pixel 7 model with 128 GB of Internal Storage. 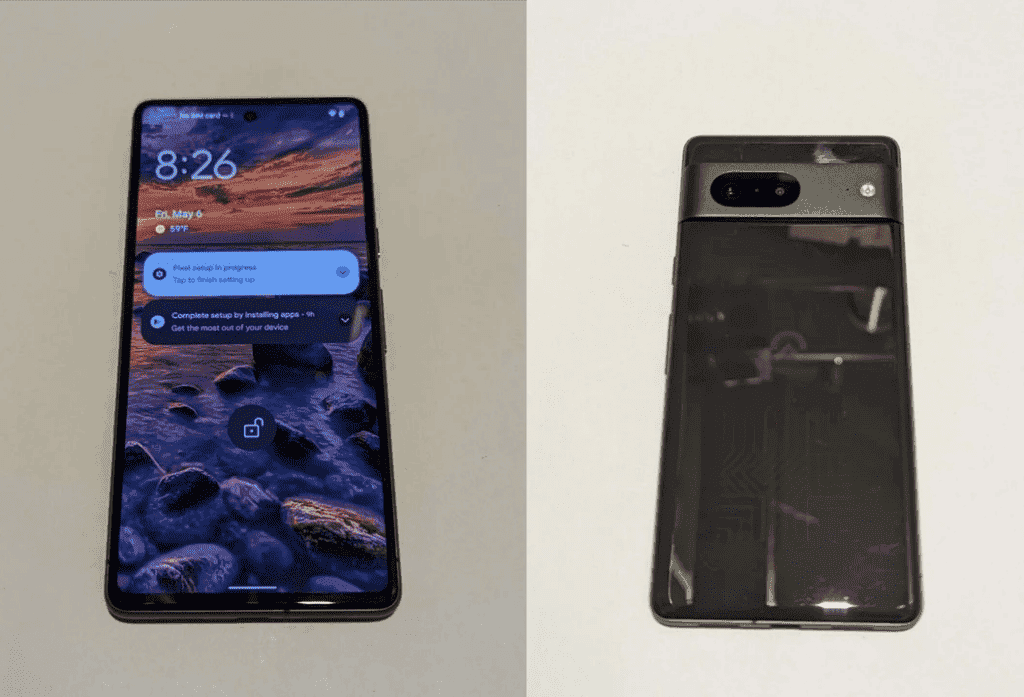 Apparently, the Pixel 7 features the same design as the Google Pixel 6 series. It packs a flat AMOLED screen with a punch-hole cutout at the center. It serves as a house for the selfie shooter. Moving around to the back, the device packs a pill-shaped camera cutout. It’s surrounded by a thick protruding rectangular aluminium bar. The color option listed is the Stormy Black colorway. Judging by the photos, the Pixel 7 in its Stormy Black has a glossy finish. So the device won’t be very friendly for those who hate smudges and fingerprints.

Since this is a Pixel 7 prototype, the Google’s G logo is absent. Instead, the phone’s prototype has a insignia logo that was also present in the last year’s Pixel 6 prototype. As for other details, the Pixel 7 features power and volume buttons on the right side of the device. There is also a physical SIM card slot sitting on the left side of the handset. Unfortunately, the phone lacks a 3.5 mm headphone jack. Therefore, you’ll need to use the wireless earbuds or an USB Type-C adapter.

Google already confirmed the Pixel 7 and Pixel 7 Pro existence through Google I/O 2022. The new devices will hit the market in Fall 2022, and will debut the new generation of Tensor processors. The company confirmed the rear design of the devices on the stage, bringing back the “visor” camera island. The Pixel 7 has a dual-camera setup, whereas the Pixel 7 Pro brings a triple-camera setup. Google will also use the event to disclose the new Pixel Watch.

How to Dry Out Phone

TECNO goes all fashion and tech at Camon 19 series launch